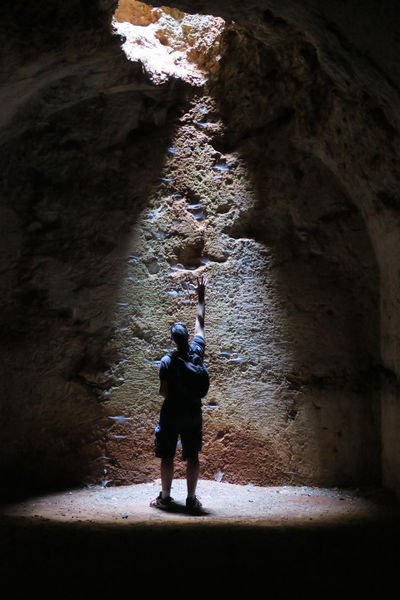 To say that we live by faith may sound like a noble way of living, but to make it practical isn’t always that easy. In this post we will look at the practical side of living by faith.

To make faith practical, a foundation of what faith is and how to make faith work effectively must be laid first. In case you miss them, be sure to read the following posts as well:

If you read the above posts, you should be ready to look at how to make your faith practical. As an example, let’s say for the purposes of this illustration that you are unsatisfied with your current working environment and you are looking for a new job.

First you will present your case before the Lord. You could, in prayer, explain to Him why you are unhappy with your current situation and why you would like to have a different job. As you pray about it, you should try to listen to what He has to say about your request and about your current circumstances.

It may very well be that you are where you are for a specific reason and purpose, in which case it is more important for you to find out what that purpose is instead of focusing all your energy and prayers on finding another job.

Since God has given us the Ministry of Reconciling others back to Him, it is important not to miss opportunities to share the gospel with colleagues or other people whom we get to deal with at our current jobs. On the other hand, the desire to find a new job may well be because God wants to reach other people, through you, at another job or in another working environment.

If you heard from the Lord that He will give you a new job, it is important to first and foremost allow the Word you received to take root in your heart. Make double sure what you heard from the Lord was in fact from Him, and then meditate on that Word and allow it to sink deep into your soul. As you do so, be thankful for the promise you received.

Luke 1:37 shows us how powerful this Word is, “For with God nothing is ever impossible and no word from God shall be without power or impossible of fulfillment.”

The reason why you should make sure the promises you receive take root, is because there is an enemy walking around like a roaring lion looking who he can devour. When the Lord gives you a promise, you need to guard it with all your heart as the enemy will want to take the promise away from you, just like he almost managed to do with Abraham.

While the following verse is more specifically aimed at explaining how new ‘Christians’ can fall away from the faith, Mark 4:17 can also apply to the word of promise we receive and it says, “And they have no real root in themselves, and so they endure for a little while; then when trouble or persecution arises on account of the Word, they immediately are offended (become displeased, indignant, resentful) and they stumble and fall away.”

When trouble or persecution arises on account of the promise you received – which is the Word from the Lord for your life – do not become offended and in the process cause the promise to fall away from you.

Secondly, let your words line up with the promise you received. In other words, if someone says you will never be able to find a job in this current economy, you respond by saying, The Lord already has a job for me and I am waiting for His perfect timing in which He will let it come to pass. If someone says it is impossible these days to find a good job, you respond by saying, Nothing is impossible for the Lord (see Luke 1:37).

Thirdly, your actions must correspond with what you are believing God for. If a seemingly good job comes your way, you should first pray over the matter and ask the Lord if it is from Him. His timing is not necessarily our timing. If you could trust Him initially for a promise regarding a new job, you can now also trust Him for an answer regarding the opportunity presenting itself.

Instead of allowing the word to fall away from you, allow your words to stay in line with God’s words for your life, and take corresponding action that is evident of your faith.

The posts on the topic of Faith & Hardship have also been published in book form & is available from Amazon.com

Some time ago, I came to a point in my career where I seriously questioned whether I was still working for the right company. I was frustrated in my work, and frustrated with the working environment. I took the matter to prayer and asked the Lord to give me another job. At the time it felt to me that the Lord was rather silent about the matter, and I struggled to get clear direction from Him.

I decided to not be passive about the situation. I prepared my curriculum vitae and sent it to a few people I knew, as well as a few recruitment agencies. Subsequently I went for a few job interviews, but nothing came of it. This went on for a while and I almost gave up on the idea of finding other work.

Then one day I was contacted by someone who made me an offer which, on the surface, seemed like an incredible opportunity. Not only did the job promise to be rewarding, but the salary was a significant amount higher than what I was earning at the time. However, the prospective company put some pressure on me to accept the offer as soon as possible, as they needed me to urgently start working on a project.

Needless to say, the higher salary was very enticing, and my first instinct was to immediately accept the offer and to give thanks to the Lord for finally answering my prayers. Nevertheless, I told the company I would need a few days (disclaimer: sometimes making a quick decision could be required) before I would make a final decision. I then prayed about the matter and asked the Lord that He would intervene if this opportunity was not from Him.

The following week proved to be rather interesting. Through a series of events, it became clear to me that not all was what it seemed. I started to question the honesty of some of the people involved in the recruitment process, and decided to reject the offer instead. I was of the opinion that, if the offer was from the Lord, I wouldn’t have to question the integrity of some of the people I was dealing with. While I was a bit disappointed about the whole situation, especially in light of the increased salary I would miss out on, a certain amount of peace came over me as I made the decision not to take the offer.

The next year proved to be even more interesting. As I remained with the company which employed me at the time, things gradually began to change in my favour. One of the managers who I struggled to work with, decided to resign. In addition, I started to get involved in other things which made my work interesting again. Career wise, I was also offered opportunities which were worth a lot to me. I could clearly see how God was in control, and suddenly I was glad that I was still working for the same company.

One day, somebody phoned me and told me how things were going at the other company who’s offer I had rejected. The person who phoned me had some dealings with the company and told me that the company was in financial trouble. Apparently contracts were not being renewed and some people were about to be laid off. I just smiled and thanked God for His faithfulness in my life.

While I was fortunate to hear about how God had prevented me from making a wrong decision in my career, we should trust God for all the other times where we don’t necessarily know about everything else He saves us from. He is always working in the background, making all things work together for our good – if you love Him and if you are called according to His purpose (Romans 8:28).

1 thought on “A Practical Example Of Living By Faith”