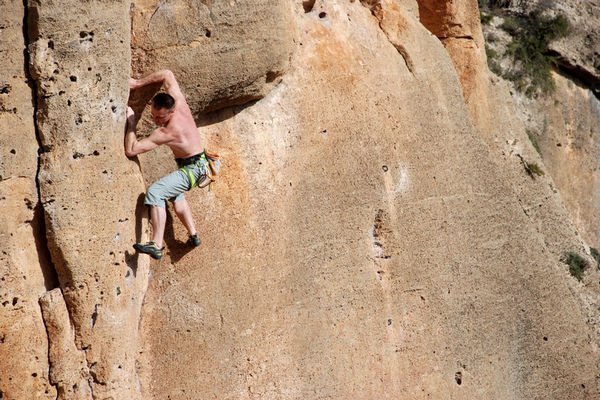 When God instructed Moses to lead the children of Israel out of Egypt, He promised that He would take them to a new land that was flowing with milk and honey. In Numbers 13 we see that God was about to fulfil His promise, and in verse 2 He said to Moses, “Send men to spy out the land of Canaan, which I am going to give to the sons of Israel…”

Moses assembled a company of spies consisting of twelve leaders, one from each of the tribes of Israel. Numbers 11:21 says, “When they had gone up into the Negev (the South country), they came to Hebron; and Ahiman, Sheshai, and Talmai the descendants of Anak were there.”

Now the descendants of Anak were descendants of the Nephilim, whom we know the Bible refers to as giants. Because of these giants, the spies came back trembling with fear.

Of all twelve leaders, only Joshua and Caleb were operating in faith. In verse 30 Caleb quieted the people before Moses, and said, “Let us go up at once and take possession of it; for we will certainly conquer it.” However, in verse 32 the men who had gone up with him said, “We are not able to go up against the people [of Canaan], for they are too strong for us.”

While the people had a clear promise from the Lord, their words were not in line with the promise. Furthermore, because of their discouragement as a result of the negative report, they started to mourn instead of taking appropriate action. As a result, the children of Israel worked their way out of the promise by abandoning their faith.

Because of the people’s unbelief in the face of adversary, God declared that the generation who rebelled against His word would not enter the promised land, save for Caleb and Joshua. God’s judgement was that all aged twenty and up would all perish in the wilderness, and only the next generation would enter the promised land. In Numbers 14:31 God said, “But your children whom you said would become plunder, I will bring in, and they will know the land which you have despised and rejected.”

What happened next is a great example of blind “dead” faith.

The people of Israel decided to act on the Word of the Lord which they had received prior to their rebellion. Numbers 14:39-42 say, “Moses spoke the Lord’s words to all the Israelites, and the people mourned greatly. 40They got up early in the morning and went up to the ridge of the hill country, saying, ‘Look, here we are; we have indeed sinned, but we will go up to the place which the Lord has promised.’ 41But Moses said, ‘Why then are you transgressing the commandment of the Lord, when it will not succeed? 42Do not go up, or you will be struck down before your enemies, for the Lord is not among you.’”

The Israelites no longer had a word of promise from the Lord.

While the words that proceeded from their mouths were now positive, it was in direct opposition to the will of God. Any subsequent act of faith was rooted in blind faith, as they were operating in their own strength with no title deed for what they were hoping for.

In Numbers 14:44-45 we see how this act of blind faith played out, “But [in their arrogance] they dared to go up to the ridge of the hill country; however, neither the ark of the covenant of the Lord nor Moses left the camp. 45Then the Amalekites and the Canaanites who lived in that hill country came down and struck the Israelites and scattered them as far as Hormah.”

Faith That Is Alive

In the previous post we talked about How To Activate Your Faith, and we saw that there are 3 key ingredients to having faith that is alive. The 3 key ingredients are: We are now going to see how the next generation, the Joshua Generation, put all 3 of these ingredients in practice. This is crucial for any person who needs to endure and overcome the struggle, challenges or hardship they are facing.

Unlike the Israelites who perished when they acted in blind faith, Joshua and Caleb, together with the next generation of Israelites, were able to conquer the giants based on the new promise from the Lord.

Joshua had to wait patiently though, and only at the appointed time did God say to him in Joshua 1, “Moses My servant is dead; now therefore arise [to take his place], cross over this Jordan, you and all this people, into the land which I am giving to them, to the sons of Israel.”

Joshua then prepared the people to take possession of the promised land, and in Joshua 1:16 their words were in line with the Word from the Lord when they responded by saying, “All that you have commanded us we will do, and wherever you send us we will go.”

The remainder of the Book of Joshua explains in great detail how they then put their faith into action by obeying every instruction from the Lord carefully.

For example, in Joshua 3:13 Joshua said, “When the soles of the feet of the priests who carry the ark of the Lord, the Lord of all the earth, [come to] rest in the waters of the Jordan, the waters of the Jordan flowing down from above will be cut off, and they will stand in one mass [of water].” The instruction was to walk into the Jordan river, and only when their feet were submerged did the water that was flowing down stop, and the people crossed over on dry land.

In Joshua 6 we see how God instructed Joshua and his army to march once a day around the city walls of Jericho, for six days. On the 7th day they had to march around the city seven times. The instruction was specific, and when the priests blew the trumpets and at the sound of the ram’s horn the people had to shout a battle cry. Joshua 6:20 says, “So the people shouted [the battle cry], and the priests blew the trumpets. When the people heard the sound of the trumpet, they raised a great shout and the wall [of Jericho] fell down, so that the sons of Israel went up into the city, every man straight ahead [climbing over the rubble], and they overthrew the city.”

Another example of faith in action is found in Matthew 14, where we read about the disciples who were in a boat during the night. Jesus came to them, walking on water, and when they saw Jesus they were terrified and thought it was a ghost. Jesus said to them that they needn’t be afraid, for it was He, walking on the water towards them.

Peter then said in Matthew 14:28, “Lord, if it is [really] You, command me to come to You on the water.” Peter’s words were already in agreement with the Lord’s words when Jesus replied with “Come!”. Verse 29 says Peter then got out of the boat, and walked on the water towards Jesus. It is important to note that Peter had faith, but he first waited on the instruction from the Lord before he took appropriate action.

Faith Because Of Who God Is

The posts on the topic of Faith & Hardship have also been published in book form & is available from Amazon.com

While the faith heroes like Joshua and Peter waited for a direct word from the Lord, it is possible to stand in faith that is alive when we merely trust in who God is while we don’t necessarily have a direct Word or Promise from the Lord.

In the Book of Daniel we read about King Nebuchadnezzar who made a decree whereby the people had to fall down and worship a golden image. However, in spite of this decree, Daniel’s three friends, Shadrach, Meshach, and Abednego refused to bow down in idol worship.

This infuriated Nebuchadnezzar, and in Daniel 3:15 he said that if they would “…fall down and worship the image which I have made, very good. But if you do not worship, you shall be thrown at once into the midst of a furnace of blazing fire; and what god is there who can rescue you out of my hands?”

Faced with death, they defied the king by saying in verses 16-18, “O Nebuchadnezzar, we do not need to answer you on this point. 17If it be so, our God whom we serve is able to rescue us from the furnace of blazing fire, and He will rescue us from your hand, O king. 18But even if He does not, let it be known to you, O king, that we are not going to serve your gods or worship the golden image that you have set up!” The king then did throw them into a blazing furnace, and God did rescue them by allowing them to go through the fire without it even scorching them.

In this example, their faith was rooted in who God is, rather than on a specific promise that He would protect them. In fact, even if God wouldn’t have protected them, they still trusted Him regardless of the outcome. It is worthy to note that God did allow this miracle for the purpose of the glory of God. Daniel 3:28-30 say, “Nebuchadnezzar responded and said, ‘Blessed be the God of Shadrach, Meshach, and Abednego, who has sent His angel and rescued His servants who believed in, trusted in, and relied on Him! They violated the king’s command and surrendered their bodies rather than serve or worship any god except their own God. 29Therefore I make a decree that any people, nation, or language that speaks anything offensive against the God of Shadrach, Meshach, and Abednego shall be cut into pieces and their houses be made a heap of rubbish, for there is no other god who is able to save in this way!’”

There are many other examples of faith in the Bible where someone trusted in who God is, regardless of the outcome of their situation.

In the Book of Esther, we read how Esther was willing to do what she felt compelled to do, even if it would cost her life. Esther relied entirely on God’s ability to save her, but she was also fully surrendered in case He wouldn’t.

In Esther 4:16 she said, “Go, gather all the Jews that are present in Susa, and observe a fast for me; do not eat or drink for three days, night or day. I and my maids also will fast in the same way. Then I will go in to [see] the king [without being summoned], which is against the law; and if I perish, I perish.”

This is why it is so important to Know Who God Is, so that we can trust in His character and bigger plan regardless of how things look around us.