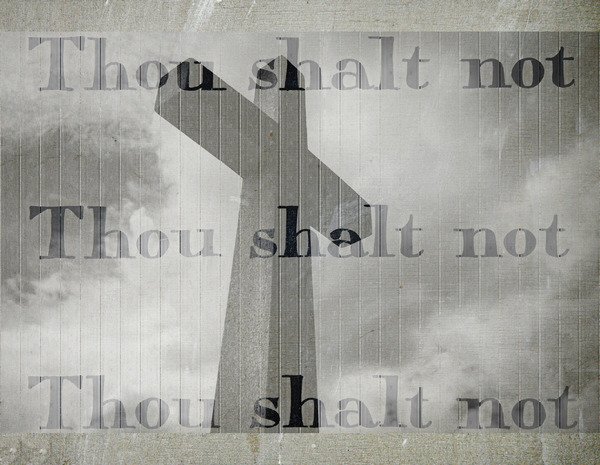 Concerning the Law, Galatians 3:19a makes it clear and says, “…it was intended to be in effect until the Seed (the Descendant, the Heir) should come…”

From this verse we see the Law was meant for a set period of time only – until Jesus Christ came.

When Jesus was crucified the Law was nailed to the cross with Him. Colossians 2:14-15 says, “Having cancelled and blotted out and wiped away the handwriting of the note (bond) with its legal decrees and demands which was in force and stood against us (hostile to us). This [note with its regulations, decrees, and demands] He set aside and cleared completely out of our way by nailing it to [His] cross. 15[God] disarmed the principalities and powers that were ranged against us and made a bold display and public example of them, in triumphing over them in Him and in it [the cross].”

One of the Scriptures in the Bible which leaves many believers in disagreement is found in Matthew 5:17-18 where Jesus said, “Do not think that I have come to do away with or undo the Law or the Prophets; I have come not to do away with or undo but to complete and fulfill them. 18For truly I tell you, until the sky and earth pass away and perish, not one smallest letter nor one little hook [identifying certain Hebrew letters] will pass from the Law until all things [it foreshadows] are accomplished.”

Many say this passage shows that the Old Testament Law should still be kept, as Jesus clearly tells us not even the smallest letter nor one little hook that identifies certain Hebrew letters will pass from the Law. When we look at Colossians 2, this argument obviously doesn’t make sense. From this Scripture in Matthew 5 there are a few prominent things we should not overlook.

The first thing we should not overlook is where Jesus said, “I have come not to do away with or undo but to complete and fulfil them.” The Greek word translated as fulfil is ‘plero’, which means to satisfy, expire, and to end by fulfilling like other prophecies when fulfilled. So while Jesus did not come to do away with the Law, He first and foremost came to satisfy the Law.

The Law demands that everyone who is guilty of breaking even the smallest of its commandments should die. We broke the Law; Jesus came to satisfy the Law by dying in our place.

Furthermore, by satisfying the Law, even the smallest letter and every little hook that identify certain Hebrew letters of the whole Law or Contract at Sinai (where the Law was presented to Moses and Israel) was fulfilled, ended and abolished in Christ and “done away” with by Him.

2 Corinthians 3:14 says, “… for until this present day, when the Old Testament (the old covenant) is being read, that same veil still lies [on their hearts], not being lifted [to reveal] that in Christ it is made void and done away.”

This does not mean we are now without any Law at all. It only means the Law can chase you all the way to the cross, but no further than the cross. The Old Contract or Old Testament Law has been “done away” with. However, it wasn’t just done away with – it was done away with when Jesus made the New Contract; there was a replacement, or a renewal with some changes, if you like.

A New Covenant has been established!

2 Corinthians 3:6 says, “[It is He] Who has qualified us [making us to be fit and worthy and sufficient] as ministers and dispensers of a new covenant [of salvation through Christ], not [ministers] of the letter (of legally written code) but of the Spirit; for the code [of the Law] kills, but the [Holy] Spirit makes alive.” – emphasis added.

Furthermore, while the New Covenant was established, a New Priesthood was established as well. Hebrews 7 talks about the transition that was made between the old and the new priesthood, and in verse 12 we read, “For when there is a change in the priesthood, there is of necessity an alteration of the law [concerning the priesthood] as well.” – emphasis added.

So the Old Contract was fulfilled, ended, and abolished in Christ and “done away” with, by Jesus Christ, when He established the New Contract. Jesus replaced the old priesthood and became our perpetual High Priest, our Mediator before the father, continually pleading on our behalf as He paid the price for our salvation in His own blood.

This means we now look to the New Testament for how to conduct ourselves. This doesn’t mean we discard the Old Testament with all its useful instructions and teachings, it only means we are no longer bound by all of its Laws.

Interestingly enough though, when we look at the New Testament, we see the Moral Law of God has not changed. Nine of the Ten Commandments still form the foundation for God’s Moral Law. The New Testament still commands us to love God above all else, and to love our neighbour as ourselves.

While the cultural and old Levitical priesthood laws have been done away with, God’s Moral Law still stands.

The New Testament testifies to the fact that all liars, thieves, adulterers, murderers and blasphemers (only to name a few) will burn in the lake of fire and cannot enter heaven unless forgiven through the sacrifice of Jesus Christ on the cross.

Since we are all guilty of breaking one or more of God’s Moral Law (who can say they never told a lie before?), our only hope of being reconciled to the Father is through Jesus Christ, by repenting and trusting in the Saviour. For an in depth look also read Why Jesus Said He Is The Only Way

When it comes to the Old Testament Law, the only Old Testament requirement from the Ten Commandments we don’t have to keep is the Sabbath. Colossians 2:16-17 says, “Therefore let no one sit in judgment on you in matters of food and drink, or with regard to a feast day or a New Moon or a Sabbath. 17Such [things] are only the shadow of things that are to come, and they have only a symbolic value. But the reality (the substance, the solid fact of what is foreshadowed, the body of it) belongs to Christ.”